I have a multiple phone number line at home. The main number is actually not used at all and is muted. The advantage of that is that should a phone company ever illegally sell data, the buyer would always end up with that number that's never answered. However, it happens that sometimes there is a call on the display. Now, normally Telemarketers call with "number hidden". But unfortunately they cannot do that with me. I have a function, where if somebody calls with a hidden caller ID, my phone simply generates a message "this connection does not accept calls with hidden caller ID". So either the guys give up or they reveal themselves. If they do reveal themselves I can then check, if the number is in the directory. Recently there was a Telemarketing company being extremely patient and I had their number on the display once a day for about two weeks. They would even call at times like 9 o'clock in the evening. So I got angry and did the following: I deviated the phone line they called to their own number :-D Funny enough, their phone terror stopped immediately...
Eingestellt von Beat Zimmermann um 7:59 AM 1 comment: 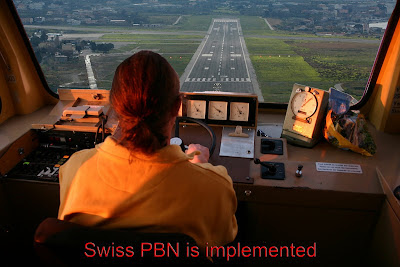 Many people ask me now, if any states already had already implemented the PBN concept. Switzerland has. Here is a cockpit shot from a PBN certified flight deck ;-). Click the picture for full size image.
(photograph courtesy of Thomas Buchanan, Chairman of the ICAO IFPP)
Eingestellt von Beat Zimmermann um 9:19 AM 1 comment:

Here is a video that you will like. Maybe you have heard of the crazy airport in St. Maarten in the Caribean Sea. It's just insane!

I am extremely happy to announce a course that I had in mind for a long time, but the necessary instructor didn't exist, or at least I didn't know he existed. Then heaven (or whoever...) made me cross paths with Alex Hartland and there we go.
It's a one week course about flight operations aimed specifically at procedure designers. The background of the idea: many procedure designers are recruited from the non-flying side. That means they actually don't know how their procedures are flown in a moderairliner, what instruments there are, how operators calculate contingency procedures or how visual minima are calculated.
So Alex and me have developed a program together, which I find exciting. I have created a flyer about it and you can download it here.

I have added some useful info to the ANI website:
As the basic courses comply with the ICAO doc. 9906 vol. II, I have created a downloadable brochure that explains the training concept, pre-requisite skills, knowledge and attitudes as well as the requirement for OJT. This brochure can be downloaded from this page.

Furthermore I have added the new course "Flight Operations Awareness". Instead of me explaining here, go to the website and download the flyer.

I have also added information about the training locations Fukuoka and Pezinok. For some locations, such as Fukuoka, I have created a link to a photo page, showing you some impressions of the area.

Take a moment to explore. There are some other exciting changes in the training programs in the pipeline. More information, when I have it all worked out. So long!
Eingestellt von Beat Zimmermann um 2:05 PM No comments:

The last couple of week, there was a court trial regarding the CFIT accident of a Crossair airplane on November 24, 2001 in Zürich/Switzerland. You can find a brief description of the accident here.
The full report of the Aircraft Accident Investigation Bureau can be downloaded from their website.
Now the two top executives of Crossair, CEO Moritz Suter and his Deputy at the time, André Dosé (later became the CEO of Crossair and Swiss International Airlines) were accused for negligent homicide in 24 cases. Personally I don't like to see that tendency in general: People who have absolutely nothing to do with the event whatsoever, are taken under fire with the goal to find somebody to blame. Excuse me, it was an accident! So if somebody's son kills somebody in a car accident, the parents will be blamed for it because they let him use their car or what??
Anyway, the sentence was: free of all charges, which I appreciate. When you read the final report you will find out that the pilot wasn't quite up to his task and you could question whether he should have been in an airliner cockpit at all. But what's that got to do with the CEO? Can it be Steve Ballmer's (CEO Microsoft) or Steve Jobs' (CEO Apple) problem, if some programmer is not up to his tasks and makes errors over and over again? I don't think so, for that there are executives on a lower level. I have to say "thank you USA" for this ridiculous legal system, where McDonalds can blamed for not warning the people that hot coffee is indeed hot.
However, now that Suter and Dosé are free of the charges, every idiot comes out of his corner and assumes himself to be qualified to comment about it (including myself as you can see *wink*). Comments like: "Of course, you just need to be able to pay expensive lawyers", "I knew, they won't be blamed, it's a shame", "those judges are useless" and alikes can be read on the Swiss TV's website. Oh really? So those judges are not up to their task? You would be better, right? And who do you want to blame for appointing such terrible judges? The President? God almighty? The gardener (the gardener is always guilty...)?
Again, people misunderstand the term "democracy" here. Democracy means, we are ALLOWED to have an opinion. It doesn't mean we MUST have one. In other words. He who has not a clue, should shut the f* up!
And when it comes to aviation, my view is: Nobody has a clue, except eventually the people in aviation themselves-
Eingestellt von Beat Zimmermann um 2:37 PM 2 comments:

The Singapore Aviation Academy, one of the world's famous institutions for Procedure Design/PANS-OPS training has changed their concept to an eight week training program. Their program is split into two consecutive models of 5 weeks and 3 weeks. In the first module they cover the basics, conventional ground based navigation including ILS. The second module covers RNAV and RNP. So you can get either trained fully within 8 weeks in a row (watch out when you get back, make sure your wife remembers you...) or you can get a non-RNAV training in one year and add-on the RNAV bit the year after.
With this change of concept, the SAA reacts to the increasing quantity and complexity of the material contained in PANS-OPS.
Eingestellt von Beat Zimmermann um 7:42 AM No comments:

What is a sick industry? According my definition, an industry where people are not really paid what they are worth. Of course there will always be people, who can sell themselves better than others in all industries. But I recently spoke to a good friend of mine and she is constantly struggling income wise. Her profession? She is a Concert Pianist. Concert Pianist means two graduate studies at University level. First the Diploma as a professional Musician, which is literally a Masters Degree and then four more years of studies to get the Concert diploma. And she has to teach pupils for an hourly price that makes me laugh and cry at the same time. 8 years of Music Academy drill and she works for HALF the price as for example the gardener who overhauls my garden twice a year. HALF the price as the painter who recently painted 3 walls in my house.
This is crazy. Would somebody who studied law ever work for that price? An engineer? And more importantly: Would people EXPECT a lawyer to be that cheap? I don't think so. On the other hand people are prepared to pay 250 Dollars for a ticket so see Barbara Streisand. But when people want their kid to learn the piano, they think it must be dirt cheap. I don't understand and it makes me a bit sad...
Eingestellt von Beat Zimmermann um 9:42 PM 1 comment:

We have started the next PANS-OPS basic course for 2008 in Pezinok/Slovakia. We have a nicely mixed class with students from Poland, USA, Abu Dhabi, Romania, Slovak Republic and Tanzania. They are already sweating with the turn protection calculations, not being aware that it gets worse tomorrow with the reversal procedures :-)

2 weeks ago we have successfully completed the first course of the year in Switzerland with participants from Portugal, South Africa, the Netherlands and Turkey. In the second pert, the weather was playing some games with us, but we survived. Right now, the weather is nice here in Pezinok, but I don't think last year's heat record (39.2°C) will be broken...
Eingestellt von Beat Zimmermann um 9:35 AM No comments:

The hard life of a Stewardess :-)

I am sorry! Flight Attendant they are called. They are responsible for the well-being and the safety on board. Safety? You mean if my plane hits the ground with a wingtip (see video further down in the blog), she will make sure I don't get hurt?
Anyway, sometimes I have to smile about the English that is spoken especially by Swiss and German Stewa... uuuh Flight Attendants. Recently, a young FA asked me "DO you like a cheese or ham sandwich?" I said: "I actually like both". She said: "Oh I am not sure we have enough right now!" My answer "oh, right now I don't want a sandwich, I never eat on planes when it's a short haul" totally confused her: "But you just said wou wanted both?!" "No, I didn't. I just answered your question, which was do I like cheese or ham. Fact is I like both, but I don't want one now!"
She probably still thinks that I am totally nuts, not noticing the subtle difference between the correctly phrased "WOULD you like a cheese or ham sandwich" and the not so correctly phrased "DO you like a cup of coffee?"
Yes, first thing in the morning I do! But not now ;-)
Eingestellt von Beat Zimmermann um 6:09 PM 1 comment: