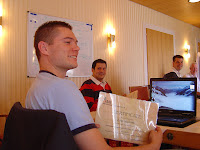 Quite a historical moment that is! Today, Evan Colpitts from Hart Aviation in Vancouver received his certificate of completion for the basic PANS-OPS procedure design training. Evan is the first procedure designer in the world, who has done his training via an online course. Currently, the ANI online course consists of seven students, actually now six, as Evan has completed his training. I am really pleased to see that the online concept works and that this learning method provides an alternative to the classroom courses.
Eingestellt von Beat Zimmermann um 3:25 PM No comments: 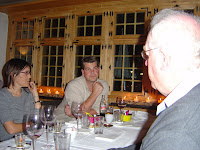 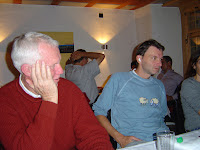 We had our dinner at the restaurant benacus in Interlaken, where chef René Schudel surprises his guests with his creativity every night with a different menu. It was a great evening with a great group.
Eingestellt von Beat Zimmermann um 9:44 AM No comments:

One of our locations for short courses, the Hirschen in Gunten/Switzerland, will close for renovation in October this year. That is, the ARINC 424 course starting Monday September 24 will be the last course in the old Hirschen. The Hotel will reopen in Spring 2009. In the meantime I will have to look for a different location for the short courses, I keep you posted on the outcome but it will be a place that matches the Gunten location as far as that's possible.
Eingestellt von Beat Zimmermann um 12:28 PM No comments: 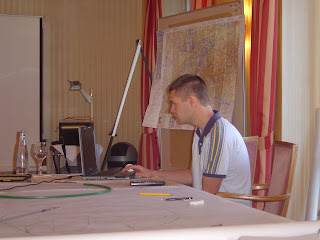 The first Procedure Designer who has done the ANI online course is currently doing his 2 week practical phase under my supervision here in Switzerland. I have to say: I like what I see. That can mean two things, 1. Evan Colpitts, the Canadian Student is a natural talent and/or 2. the online course is good stuff. Fact is: I don't see any difference in the way Evan attacks the procedure design problems I give him from the way the classroom students would. So, by Friday September 28 I am sure we see the first Procedure Designer in the world who will get a course certificate based on a distance learning program. I like that thought.
Eingestellt von Beat Zimmermann um 10:47 AM No comments:

Report from the Oslo Course

We also completed a basic PANS-OPS course in Oslo with participants from Avinor and the Irish Aviation Authority. Here I was confirmed in my view that the break between part 1 and 2 should be somewhere between 4 to 8 weeks. The break for the Pezinok course was 7 weeks and the performance of the students in part 2 was great. In Oslo the break was 15 weeks which resulted in a less efficient part 2, because some of the fundamentals from part 1 were not remembered. Should we have to have breaks of such length in the future I will make sure there is a mitigation, such as a madatory revision with a test at the end or something.
Eingestellt von Beat Zimmermann um 10:31 AM No comments:

Report on the Pezinok course 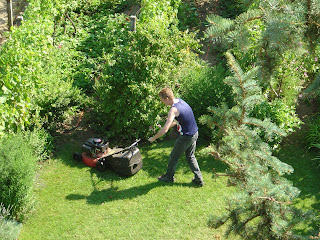 Sorry, I was very quiet for a while. That was due to two reasons: 1. I was busy lecturing 2. I had to focus on my health. So here are some news. I have completed two basic PANS-OPS courses this spring/summer. One of the courses was held in Pezinok/Slovak Republic on the premises of the procedure design company ASAP s.r.o We had 14 people there and we inaugurated the newly built training premises. Students came from the UK CAA, PANSA Poland, LPS Slovakia, CAA Bosnia-Herzegowina, Air Slovakia, CAA Taiwan, CAA Czech Republic, Romanian Air Force and ASAP themselves. The level the students reached at the end of the course was amazing, also we were quite happy with the environment. Pezinok is a small town close to Bratislava (and Vienna for that matter) and just big enough to have all necessary facilities but not so large that the students disappear in all directions after class. The chemistry in the course was quite good as the students did stuff together in their free time. And the Barbecues at Ian's house will be long remembered of course ;-) See above Ian Whitworth preparing his garden for the barbecue :-D
Eingestellt von Beat Zimmermann um 9:04 AM 4 comments: