We just terminated the ILS part of a basic PANS-OPS class at the University of Bern. As you might know, the ANI basic PANS-OPS courses are split in part 1 and part 2, part 1 covers all basics, conventional NPA, holding and enroute. Part 2 covers ILS and RNAV/APV.
Together with Professor Dr. Todd Hubbard (see staff on the ANI website) I have implemented a new concept, that involves a series of e-learning lessons between part 1 and part 2 of the course, involving some in depth coverage about specific key topics for ILS and for RNAV.
The results from the ILS class is extremely promising. I plan to extend this concept even more and apply it to part 1 as well.
Eingestellt von Beat Zimmermann um 5:06 PM No comments:

It's bizarre: I know a few people who really appreciate good food in a nice environment, they are relatively good cooks themselves, would normally say that life is too short to eat crappy food and what have you. I have to admit, so far I totally agree. I am ready to pay a bit more to get a great experience. BUT I also admit that once in a while I like having a Whopper at Burger King or a Big Mac at McDonalds. I don't see anything wrong in that. I find it funny that said gourmets always make fun of me like "whoaa, I never thought you'd go to a Mac, you normally prefere to eat at nice places and you're also a good cook. I would NEVER even touch any of those Burgers! It's so crappy stuff!!" That's the kind of stuff I get to hear. Funny enough, those guys - once they sit in an airplane - eat every crap at every inappropriate time! I don't know what that is, it must be genetic. What's the deal with eating in an airplane anyway??! When I take my car from A to B I don't take in a hot meal on my hip after 10 minutes of drive either.
What kind of experience should it be to sit in an economy class seat much to close to my much too big neighbor and eat some crappy food?? I would never sit so close to even my girlfriend when eating! Okay in Business Class the quality is slightly better and at least there is enough distance to my neighbor. But: Who told the airlines it's a good idea to serve a hot meal at 1.00 am when leaving Bangkok for example? When I fly from Bangkok at this time at night I will a) have had dinner at one of the great restaurants in town and couldn't care less about airline food and b) I want to sleep and I don't appreciate the noise and the terrible smell of the food served (would you like beef, chicken or pasta?). Or flying from North America to Europe: Most flights leave in the evening, serving a dinner right after departure. Before arrival, they serve a breakfast. Great, let's do the math: The flight left Miami at 9.00 pm. at 10 pm. they serve dinner. let's say at midnight the service is more or less done when flying business class. That's after 3 hours of flight. about 90 minutes before arrival they serve breakfast. That's about 3 and a half hours later. Who on earth is EVER going to have breakfast at 3.30 am, when he finished dinner at midnight??
Eingestellt von Beat Zimmermann um 2:57 PM 1 comment: 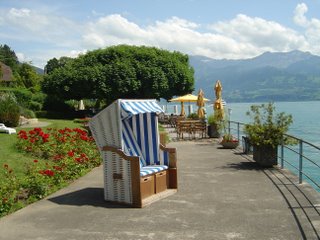 I have spoken to Jim Terpstra and we agreed to repeat the successful ARINC 424 Database coding and Charting course we provided this year in June in Gunten/Switzerland. We will set the exact dates in early November, but it will definitely be in late June 2007, it looks like June 18 - 22 right now. I am happy that we can repeat this, we had a great time. The weather was nice, we took the opportunity to watch some world cup matches and we ate ourselves through Freddy's menu at the beach bar next door at lunch time :-) So if you would like to participate, you can tell me already now, I'll reserve a place for you.
There are some entries in this Blog that I made during the course and I think there are also some comments from participants.
Eingestellt von Beat Zimmermann um 10:02 AM No comments:

This week, one of my students of an advanced PANS-OPS class in Japan was woken up by his 6 month old baby daughter who was crying in the middle of the night at 3 o'clock. The student's wife also woke up and asked what time it was. He grabed his watch to check the time (3 o'clock), still half asleep and said to his wife: "3 Nautical Miles!"
Eingestellt von Beat Zimmermann um 4:49 PM 1 comment: