If you ever wondered about GPS accuracy 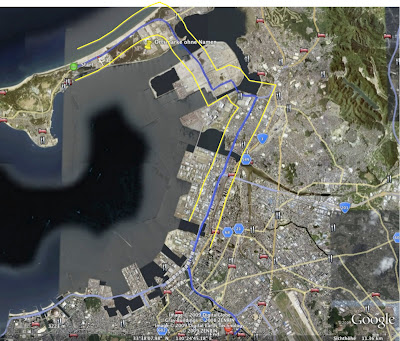 Recently I adopted an idea from Maurizio, one of the ANI Geodesy teachers, to record some tracks with a GPS receiver in order to illustrate the tracking accuracy on a satellite image. I didn't have my Garmin with me here in Japan, but I have a GPS application called MotionX on my iPhone. So I did some experiments when I was riding a train and a bus on another occasion and recorded the track. I then exported the track into kmz format which can be opened with Google Earth. It is quite amazing: on the picture here, you see the blue track, which is what the GPS thought where I was going, but obviously the bus was driving on the street.
If you click on the picture you will see a larger version of it. What I then did as a little experiment was that I drew the NOMINAL track (the street) and offset it by 2 RNP with RNP = 0.1. This literally represents the containment area in an RNP AR APCH procedure. Now if you remember that I didn't record the track with a receiver that is certified for such operations and has an acceleration sensor that is a bit more sophisticated (I did it with an iPhone in case I haven't mentioned or you forgot... The antenna of the receiver inside a bus, the signal partially shaded by buildings, multipath etc.), the I would say the result is quite nice.
Eingestellt von Beat Zimmermann um 11:47 AM No comments: